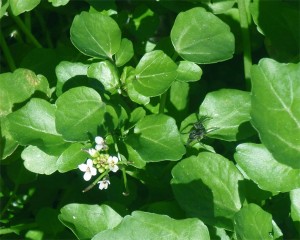 It’s National watercress week with the watercress festival in Alresford.  We get our watercress from the Hairspring beds in Hambrook which was founded in 1870 by George Hair and has been in the family ever since.

Originally the beds were supplied with groundwater, but with droughts in the 1970s,  they have additional supplies of borehole water as well – although they didn’t need them this winter!

It is a member of the mustard family and its small, dark green leaves have a fantastic peppery kick.  Recently paraded as a superfood (I think virtually all decent food that has not been processed will soon get this label!) the Daily Mail went so far as to say that “One woman even managed to reduce her facial wrinkles by an incredible 39 per cent” after eating a bunch of watercress a day.  It is a rich source of beta carotene, high in Vitamen A and C, so, form an orderly queue and come and buy some lovely local greenery.