We buy a lot of our fish from Pete Williams who lands his fish off the boat Sarah C at Emsworth.  Over the last couple of months Pete has been struggling to get to sea due to the horrific series of storms that have battered the South coast.

As a result we have decided to set up a mini-fundraiser for Pete at the farm shop birthday party on 15th March.  There will be a raffle, with prizes such as hampers, places on our courses and fish to be won. 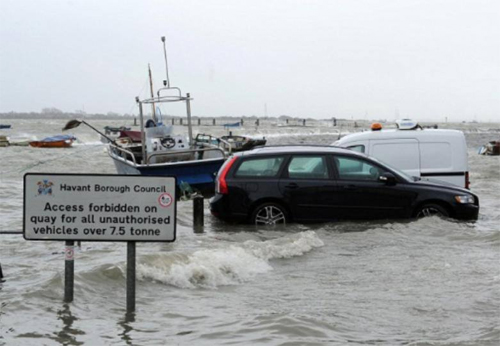 Since the 5th December to the end of February, Pete went to sea for a total of 6 days – or one day in every 14. At the same time he lost 6 strings of whelk pots, 2 strings of cuttle traps (that’s 20 traps at about £70 per trap) and a string of lobster pots.  His dingy sank and needed to be fully repaired, 30% of his nets were destroyed, and his van got flooded at Emsworth.

Pete was one of the lucky ones – the lobster and crab fishermen have far more pots and lost the majority.  Some boats sank, such as Pete’s friend Kelvin’s boat which sank on its mooring.

So far there has been no Government support for our local fishermen – and while the Fishing Federation is in talks with the Government, they are not hopeful.  Pete has recieved a new pair of waders and may be getting a lifejacket from the Fishermen’s Mission who are concentrating on providing safety equipment as fishermen are increasingly desperate to get to sea regardless of the weather conditions in the hope of earning some money.  At the moment, spending money on their safety is not a priority.

We are supporting Pete because we have been buying fish off his boat for nearly two years.  He is the last commercial fisherman left in Emsworth and we need to support our small, local dayboats.  It is this type of fishing that is the most sustainable – Pete targets specific species, and most bycatch is also sold.  As a result we sell whatever Pete lands, including huss, herring, plaice, Dover sole, gurnard, cod, bass, mackerel, cuttlefish, ray, crab and lobster to name a few.

If you cannot make it to the farm shop on 15th March for our birthday party, but would like to support Pete and enter the raffle, you can purchase tickets at the farm shop from today.  Proceeds will go toward purchasing new fishing equipment.