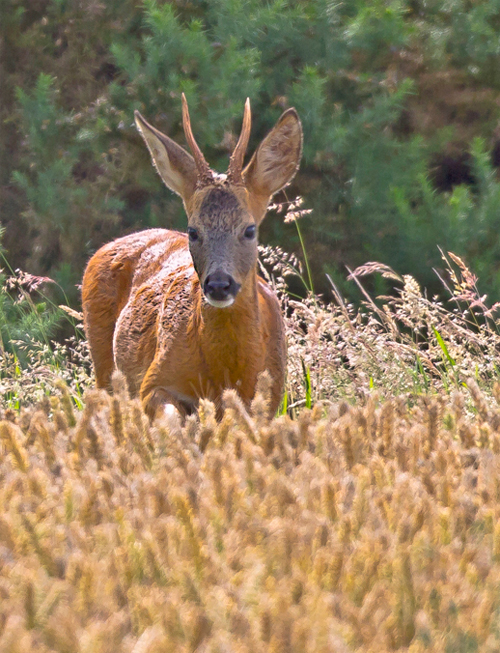 Roe bucks are currently the only deer in season at the moment which means that we have limited supplies of venison in the shop. While there are plenty of roe deer on the Stansted Estate, the foresters avoid shooting the larger bucks as they have established territories. Considering that the grass and crops are nearly as high as a roe deer at this time of year, it makes for tricky hunting conditions. We do have some venison in the shop this weekend, but it does sell out fast.

Roe deer were endemic to the British landscape, but were hunted to extinction in the 18th Century. They were re-introduced in Victorian times and their numbers are now at an historic high. They forage on a wide selection of ground vegetation including tree shoots and saplings, and their numbers need to be controlled in order to manage the estate forests effectively, especially as we no longer have bear, lynx or wolves to keep their numbers down!

Roe deer is slightly milder than fallow, and considerably more tender and delicious than red deer which is the venison you will tend to find in supermarkets and restaurants. This is usually farmed red deer from New Zealand, which seems a bit daft considering the over-population of wild deer in this country. But as with most things wild, it is difficult to ensure continuity of supply which is why supermarkets avoid it. Remarkably most wild venison shot in this country is exported to the continent where they pay a high price for this delicacy.

You can cook venison just as you would beef – with a range of cuts from the haunch, as well as steaks, fillet and either mince or diced from the shoulder. The flavour is fantastic and it’s an extremely healthy meat, low in fat and colesterol and high in anti-oxidants.