John Geden is the Bee Farmer who set up the company in 2013 after retiring from a combined career in the British Army and Hampshire Police spanning 32 years. John had been a hobbyist beekeeper for many years but after a diagnosis of PTSD linked directly to his experiences during his career, he upscaled his beekeeping and began selling his honey commercially.

The company is now in its fourth year and in 2017 John purchased 16 beehives located on the Stansted Estate from a local retiring bee farmer and began supplying the newly built farm shop with the honey that they produce. The estate is rich with a wide range of flora and fauna and the bees feast on an abundance of meadow flowers during the spring and tree pollen from sweet chestnut, and lime trees as well as blackberries in the summer. The honey ranges in shade and colour and of course taste and really depends on the sources of nectar chosen by the bees. 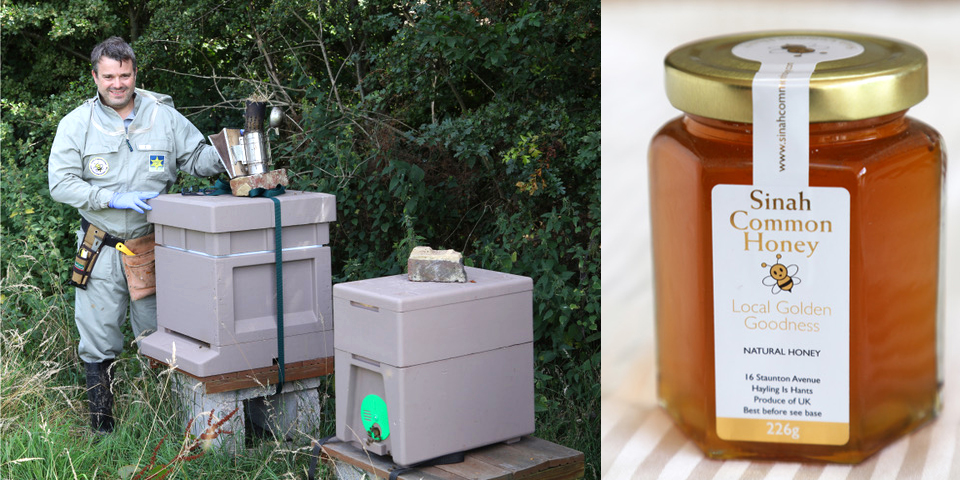 Sinah Common Honey also produce a range of wedding favours which are both unique and stylish. The range entitled ‘Meant 2 Bee’ includes small jars of honey, natural beeswax candles and small bags of bee friendly flower seeds. The company also runs beginners’ beekeeping courses and details can be found on their website. They have recently started making shoe polish with the rich golden beeswax produced by the bees; available in a range of colours they will provide a high gloss to any shoes. In June 2018 John will be launching ‘Honeybee Hand Balm’ a soothing hand balm made from beeswax, cocoa butter, Hampshire lavender and peppermint which soothes and heals dry, cracked and chaffed skin.

The benefits of natural local honey and other products from the beehive have been known to mankind for millennia. Evidence of man using honey, pollen, beeswax, propolis and royal jelly can be found from cave paintings in South America, to coptic jars in the ancient pyramids at Giza.

Recently it has been suggested that including local honey as part of your daily diet can help to build up a tolerance to local airborne pollens. Tree and grass pollen often cause a headache to allergy sufferers from as early as the start of March through to the end of September. Much has been written about the benefits of local honey in alleviating this based on the theory that the ingestion of small amounts of local pollens that are present in the honey into the body via the digestive system help to build a tolerance to the pollens that are inhaled from the air via the respiratory system. This theory is based on the fundamental concept of immunology used in many other areas of medicine and there are differing viewpoints on this theory. Do your own research, there is a plethora of information on the net that describes in more detail how local honey can help fighting allergies and also the numerous other health benefits it provides from reducing insomnia to healing common skin complaints.